Increasing evidence indicates that neurovascular compression (NVC) is not necessary for the development of trigeminal neuralgia (TN).

A retrospective chart review of patients 18 years of age and older presenting between 2007 and 2017 to Oregon Health and Science University (OHSU) to a single surgeon (KJB) was performed under OHSU Investigational Review Board approval.

Patients were diagnosed clinically based on the Burchiel classification of facial pain (Burchiel 2003). All patients had TN1 defined as idiopathic, episodic, lancinating pain lasting seconds, with pain-free episodes in between attacks. Patients with TN2, defined as predominant aching, throbbing, or burning pain for greater than 50% with minimal lancinating pain were excluded. Patients with a diagnosis of multiple sclerosis or signs or symptoms indicative of multiple sclerosis were also excluded for the purposes of this study.

Our results indicate that in the entire population of patients with TN, a substantial number do not have NVC.  This is strikingly true in patients less than 45 years old, particularly females who out number males in this younger WONVC group by a factor of almost five to one.  These data strongly suggest that TN has a major genetic component which predisposes individuals, particularly females, to develop TN.

The question that arises is what can surgery offer patients that continue to have pain on maximum medication, but who are found to not have NVC on MRI/MRA?  Over the last decade, we have offered these patients a procedure we call “internal neurolysis” (IN).  This is effectively “combing” of the nerve, through an approach that is otherwise identical to microvascular decompression (MVD).  We now have enough data on this procedure to conclude that this procedure works for TN patients WONVC about as well as MVD works for patients with NVC.  The difference being that after IN, patients will have mild numbness in the face, which is usually not uncomfortable or disabling.  The results of first-time IN for our patients WONVC are shown in Figure 1.  The chance of being completely pain-free and off medication more than five years after IN is about 50%.  To this result, if we add patients that continue to be pain-free, but require some medication, the chance of success at more than five years is about 75%.

Currently we are working with the Facial Pain Research Foundation to identify genes that are associated with the development of TN.  Our hope is that this research will lead to a fundamental breakthrough in TN that will allow us to cure TN with gene therapy, or other innovative non-surgical approaches.

Figure 1:  Results of a first-time internal neurolysis (IN) in patients with TN1. 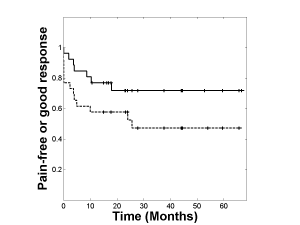