A Summary of Research on Medical Marijuana for Neuropathic Facial Pain

Literature reviews are important sources of information in evidence-based medicine (EBM). They highlight key findings, find contradictions in the published research, and provide an analysis of the approaches that researchers use. This literature review is a summary of research on the use of marijuana for relief of neuropathic facial pain.

Medical marijuana is the whole, unprocessed marijuana plant or the chemicals contained within it to alleviate the symptoms of certain conditions or diseases. The plant is comprised of over 100 chemicals, or cannabinoids. Each has different effects on the body. The first main chemical is tetrahydrocannabinol, or THC. This is the psychoactive compound in marijuana, i.e., the element that produces the high. The second is cannabidiol, or CBD. This substance does not produce any psychoactive effects. Medical marijuana has a higher CBD content, so users do not feel the euphoria associated with recreational marijuana. Recreational marijuana usually has more THC content than the medicinal variety, as this is what provides users with a “high.”

Medical marijuana shows promise for relief of chronic, neuropathic pain though the amount of relief varies from study-to-study. Overall, studies show that it offers low to moderate pain relief. Some studies show considerable pain relief, while others show none at all. Medical marijuana relieved pain no matter where in the body the pain occurred. However, there has not been a study that focused specifically on orofacial pain.

Scientists believe that medical marijuana can address allodynia, abnormal pain from normal sensations such as light touch, slight temperature changes, or gentle brushing of the skin. Endocannabinoids are neurotransmitters which send signals through the brain. These signals are important for many functions in the human body including those involving mood, pain, and inflammation. Endocannabinoids could be early players in bringing on allodynia. Using medicines to regulate the endocannabinoid system could be a breakthrough in treating neuropathic pain that is untreatable with commercially available pain killers.

Studies suggest that patients try other treatments with higher levels of evidence before turning to medical marijuana. A pharmaceutical study classified cannabinoids as 4th level treatment behind other medications such as anti-epileptic drugs, tricyclic antidepressants, topical lidocaine, selective serotonin-norepinephrine reuptake inhibitors, and even opioid analgesics. Most studies believe patients should use cannabinoids along with other treatments. Only one study suggested that patients use cannabinoids as an alternative to conventional medications.

How is medical marijuana administered and dosed?

Whole-plant cannabis is smoked or vaped, extracts are oromucosal sprays, and synthetics are taken orally in pill form. The therapeutic range of cannabinoids is small; often small doses are sufficient for clinically significant pain reduction. A 2014 study compared two doses of cannabis (mediumdose, 3.5 percent THC, to low dose, 1.3 percent THC) to see if the pain relief from the low dose was enough to recommend using lower doses to avoid side effects. It was. Another study injected capsaicin, an irritant that produces a burning sensation, in healthy volunteers and tested the efficacy of different doses of THC as a therapy. Low dose cigarettes (two percent THC) had no analgesic value, while high dose (eight percent) cigarettes were associated with reports of increased pain. The medium dose of cannabis cigarettes (four percent) produced significant analgesia. A third study compared 3.5 and 7 percent cigarettes and found that each had a ceiling effect. A ceiling effect means that once the therapeutic limit of a drug is reached, increases in dose may produce side effects but no further benefits. In this study, researchers discovered adverse effects on memory with the 7 percent dose.

To achieve full effect on pain reduction, patients may need to repeat doses of medical marijuana more often than doses of other medications. In a small study of patients with allodynia and hyperalgesia, abnormally increased sensitivity to pain, authors analyzed pain reports three hours and eight hours after taking medication. Those in the study drug group reported less pain three hours after taking their drug than those who had the placebo drug. Eight hours after intake of the drug, the reported pain differences between groups were less marked.

What else is known about side effects or adverse events?

Cannabis, the plant, and cannabinoids, natural occurring compounds in the plant, do not always significantly improve pain, but consistently improve sleep and quality of life.

Both non-serious and severe side effects were higher in patients using medical marijuana than patients in placebo groups. (Note that placebos are usually medications conventionally used for neuropathic pain, not sugar pills.) Patients in the marijuana groups reported dizziness most often. Other common side effects include dry mouth, nausea, disorientation, euphoria, confusion, sedation, and increased heart rate, which may increase the chance of heart attack in people who are already at risk. Severe side effects were dyspnea, pneumonia, pleural effusion, lower respiratory tract infection and pulmonary embolism; vomiting, diarrhea, gastroenteritis, abdominal pain, constipation, duodenal ulcer; and convulsions. Regular smoking of marijuana is associated with breathing problems such as cough and increased risk of lung infections. Gastrointestinal adverse effects occurred more often when the medicines were taken orally rather than inhaled. Many authors noted that the medications used to treat chronic pain are have some of the same side effects. Medical marijuana and placebos did not differ in terms of safety during the study period. Cannabinoids are welltolerated by patients and tolerance to their beneficial effects does not develop.

Continuous long-term use of cannabis is associated with harmful effects on bone mineral density, leading to an increased risk of bone fractures. This concerning for people who may need neurosurgery. Neurosurgeons must take extra care with instruments in these patients.

Why is more research needed?

A cannabinoid meta-analysis does not always distinguish between types of cannabinoids used or their route, dose, or duration of administration. Contrast this with a metaanalysis of a specific drug which only includes studies that use specific doses and routes of administration. Everyone knows, for example, what researchers mean by 600 mg. of oxcarbazepine taken daily by mouth. 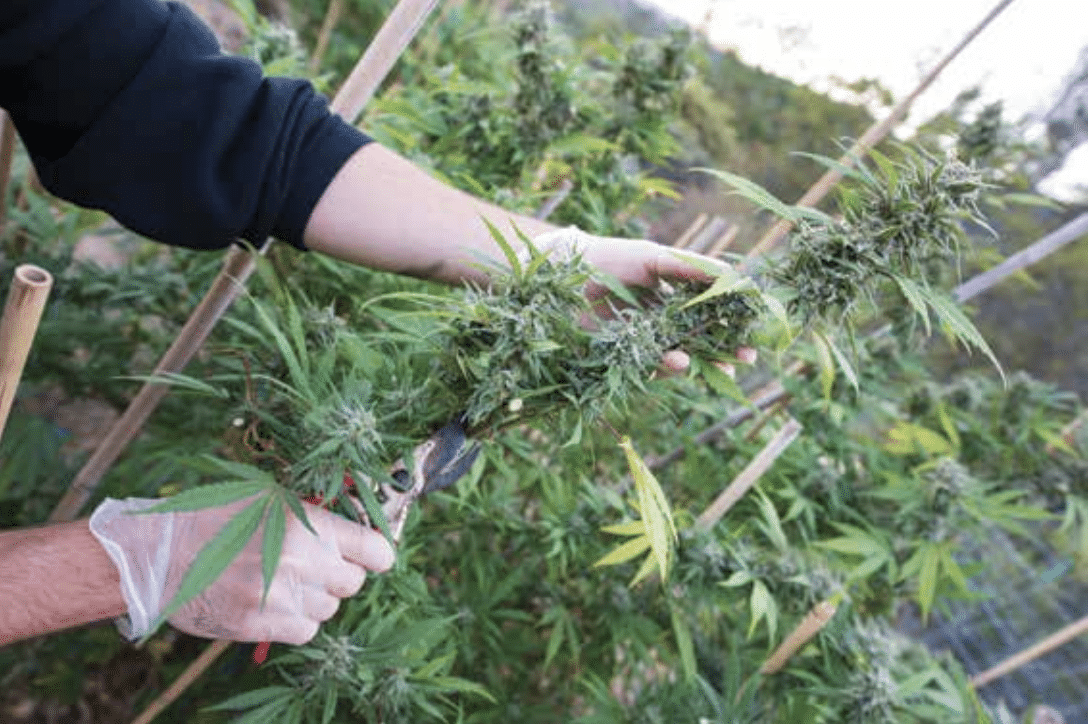 Methodology: How I Did This Literature Review

The first step in any literature review is to pose a question. I used the PICO mnemonic to formulate my question. PICO stands for patient, intervention, comparison, outcome. My question is, “Do patients with neuropathic facial pain (the “P”) who use marijuana (the “I”) get pain relief (the “O”)?” I did not specify a comparison for this review.

I used the PubMed data base for my searches. PubMed (pubmed.gov) is a free, easy to use search engine developed and maintained by the National Center for Biotechnology Information at the National Library of Medicine (NLM). PubMed includes more than 28 million citations for biomedical literature from MEDLINE, the NLM’s journal citation data base. PubMed also includes life science journals and online books. PubMed is to MEDLINE as Google is to the World Wide Web.

The next step is to select search terms. At the suggestion of Dr. Jeffrey Brown, chair of the Facial Pain Association’s Medical Advisory Board, I searched for cannabinoids and neuralgia. I did not limit my search to just facial pain because I did not think I would find enough published
studies that focused only on facial pain. In fact, I found just two. PubMed uses MeSH, or the Medical Subject Heading. Though MeSH is quite complicated, I think of MeSH as the NLM’s thesaurus. Using MeSH, a search for cannabinoids will also search for cannabis and marijuana. Searching for neuralgia will also search for neuropathic pain and neuropathy. So, I am confident that I did not miss any important research by not searching for enough terms.

I was not sure how many articles I would find, so I did a broad search going back ten years. It yielded 155 articles. I knew I could not review that many. I narrowed my search to the past five years. That yielded 62 articles, still too many for me to read. I decided that I would only look at articles published in the past three years. That search yielded 45 articles. I went back to my PICO model and narrowed my search even further by dropping articles that focused on just multiple sclerosis, cancer pain or other unrelated conditions. I also dropped animal, not human, studies. Eventually, I had just 19 articles that fit my PICO strategy. Dr. Brown sent me another that I did not see in PubMed and, of course, I included that one too. Twenty was a manageable number for me. In the end, two of the twenty articles were not available to me on PubMed or on Elsevier, a data base of medical articles to which I have access. I used a published summary for one of the two missing articles but did not have enough information to include the other.

The included journal articles came from around the world, including Australia, Brazil, Canada, China, Germany, Israel. Italy, Spain, the United Kingdom, and the United States. Most of the articles, thirteen, were systematic reviews, the strongest form of medical evidence. Three of those also had meta-analyses. Another three were meta-analyses alone. There was one random control trial and one case control study. (See the Dr. Google side bar for definitions of these research methodologies.) Finally, I read a profound editorial.

I am a public-policy health researcher. I retired from one of the world’s most prestigious research organizations after 30 years of designing and implementing experiments of public programs and processes. But I have no clinical training or experience. That limits my ability to review the articles all of which were written by professionals with medical training and/or clinical experience. The pharmaceutical research articles were the hardest for me to understand. I have made my best effort to bring you a reader-friendly, not-too-technical summary of the most current, peer-reviewed research on marijuana and neuropathic pain. If you learn something of interest, bring it to a trusted doctor. EBM combines relevant research with clinical expertise and patient values to optimize clinical outcomes and quality of life. Research alone is not enough.

Note: This is part 1 of a 2-part series on medical marijuana.

This article originally appeared in the Fall-Winter 2018 edition of the FPA Quarterly Journal, written by Anne B. Ciemnecki.